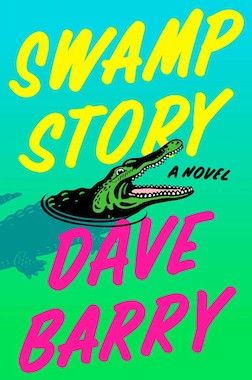 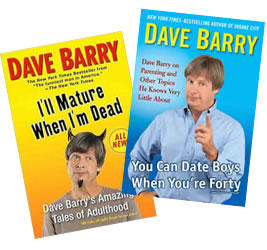 "While reading Dave Barry's Big Trouble, I laughed so loud I fell out of a chair. Luckily, there's a rug, so I didn't hurt myself." —Stephen King

"the funniest man in America."
—The New York Times

Pulitzer Prize winning New York Times bestselling author and actual Florida Man Dave Barry returns with a Florida caper full of oddballs and more twists and turns than a snake slithering away from a gator.

"Before you open this book, ask yourself one important question: How hard do I want to laugh? Because (a) it’s Dave Barry, and (b) it’s Dave Freaking Barry. Of course Swamp Story is about greed, fraud, and viral fame, but there are also big-ass reptiles to keep the sketchiest characters on their toes. Everything that happens in this wild novel could easily happen in South Florida, and probably will. Read it here first. Dave’s version is always the funniest." —Carl Hiaasen

Faced with the obstacles and challenges of life after middle age, Dave Barry turns to his best dog, Lucy, to learn how to live his best life. From "Make New Friends" (an unfortunate fail when he can't overcome his dislike for mankind) to "Don’t Stop Having Fun" (validating his longtime membership in a marching unit that performs in parades—and even Obama’s inauguration), Dave navigates his later years with good humor and grace.

The Worst Night Ever

Last year, Wyatt Palmer was the hero of middle school, having foiled a plot against the president of the United States. But now he and his friends are in Coral Cove High School—home of the Fighting Conchs—and Wyatt is no longer a hero: He's just another undersized freshman, hoping to fit in, or at least not be unpopular. More>>

The Worst Class Trip Ever

In this hilarious novel, written in the voice of eighth-grader Wyatt Palmer, Dave Barry takes us on a class trip to Washington, DC. Wyatt, his best friend, Matt, and a few kids from Culver Middle School find themselves in a heap of trouble—not just with their teachers, who have long lost patience with them—but from several mysterious men they first meet on their flight to the nation's capital. More>>

WHY THE MOOSE'S HANDS WERE BARE WE'LL NEVER KNOW
Canadian couple rescues moose with bare hands (Thanks to B&C).Read>>


WHAT'S THAT SMELL?
A fart noise blasted through a serious conversation on “The View” Wednesday ― and nobody copped to it. (Thanks to Robert Moats).Read>>


AND THEN IT CAN'T PERFORM
This shark postpones having sex until it is over 100 years old (Thanks to Jim Kenaston).Read>>


REAL DEMONS WOULD HAVE USED 'COPACABANA'
Priest claims demons tortured him with Rihanna song (Thanks to Ralph).Read>>